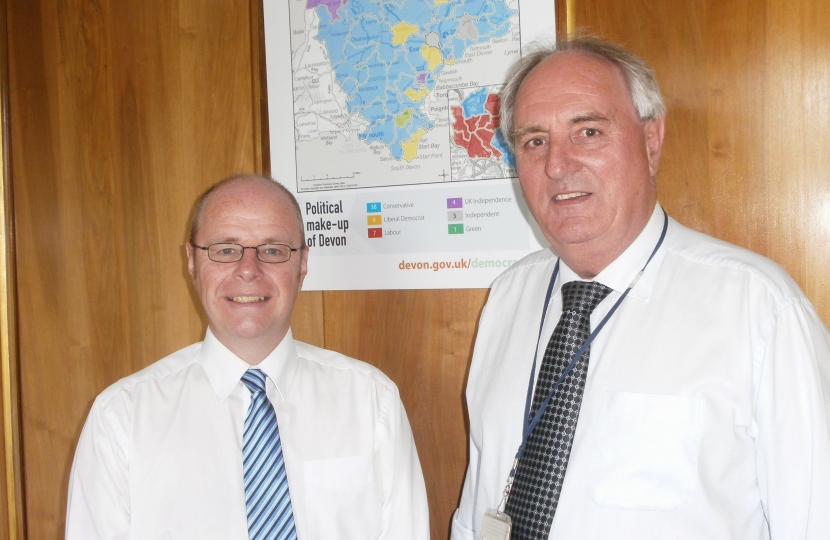 Devon County Council
One of my top priorities is to ensure that the decision-makers at all levels are well aware of what we think and what we need here in North Devon.  As I’ve said before, I’ll always bang the drum for North Devon because I don’t think that’s happened enough in recent years.  That’s why, on Monday, I went to Exeter for another meeting with the leader of Devon County Council, Cllr John Hart (see photo).
Last week I asked for your suggestions of issues to be raised.  Thank you for the response, which really was overwhelming. Suffice to say the meeting was scheduled to last an hour, but stretched to more than two and a half.
Space here is too limited to cover everything, but here’s a summary of the main issues we discussed.

North Devon Link Road
I’m campaigning for the A361 to be a proper dual carriageway between Tiverton and Barnstaple, with further improvements for the Braunton/Ilfracombe stretch.
Cllr Hart absolutely agrees with the long-term ambition for a dual carriageway.  We know the money just isn’t there at the moment, but we agreed to work together to see whether we can leverage central government funds.  On that note, I have now made a formal request for a transport minister to visit us and see the Link Road firsthand – I’ll keep you in touch.
You may also have seen my monthly update in yesterday’s North Devon Journal in which I’m asking for your help to build this campaign.  There are more details on the website.
I told Cllr Hart that I welcomed the County Council’s current consultation on modest improvements to the Link Road – anything is better than nothing.  But I made it clear that we should be ambitious in fighting for proper investment for a dual carriageway, and we will continue to do so.
Regarding the A361 between Barnstaple and Ilfracombe, especially the Braunton bottleneck, Cllr Hart is well aware that this needs tackling.  It’s a topic we’ll be coming back to in the near future, without doubt.

Care Homes
There has been a great deal of disquiet about the County Council’s decision to close or reorganise residential care homes and day centres.  I told Cllr Hart of the many representations I had received and the understandable concerns of families whose relatives rely on these facilities.
He assured me that everything is being done to ensure that all service users are found alternative accommodation as soon as possible and that the transition causes the least possible distress.  There will be different outcomes for different people – there won’t be a ‘one size fits all’ approach, which I am pleased about.  The futures of the actual buildings are currently being discussed and these will differ from location to location as well.
I said to Cllr Hart that whilst the need to save money was important, it was absolutely vital that all those who use these homes receive care that’s at least as good, if not better, under the new arrangements.  I will continue to monitor this carefully.

Libraries and Youth Centres
Residents in many communities across North Devon have contacted me about the futures of these facilities.  I have been happy to support many of the individual campaigns – especially that to save Braunton Library, which has achieved some success in getting the library reclassified as a higher priority.
I made sure Cllr Hart was aware of the need to protect as many local libraries as possible.  There will be a variety of solutions including sharing buildings with other services, bringing in volunteers and providing a mobile service.
With youth centres, again a number of different arrangements are being put in place.  In particular, we’re going to hold discussions with some of the many excellent Young Farmers Clubs to see whether they can offer support, advice and social activities beyond the valuable work they already do.  I’ll be linking up with them in the near future.

Overall, Cllr Hart was very receptive to the many different issues I raised.  I will continue to have a very close dialogue with him, both directly and through our County Councillors, who do a good job in very challenging circumstances.  Money is tight and further savings will have to be made, but I’ll keep pushing to make sure North Devon gets a fair deal.

Broadband and Mobile Connectivity
A good, fast broadband connection is vital, and I’m pushing to make sure as much of North Devon gets that as soon as possible.  While in Exeter, I took the opportunity to meet Cllr Andrew Leadbetter.  Among other things, he sits on the board of Connecting Devon & Somerset – the consortium that’s overseeing the roll-out of faster broadband.
There’s now a new map on their website showing how the project is progressing:http://www.connectingdevonandsomerset.co.uk.   This is a welcome step forward, because one of the complaints raised with me has been the apparent ‘secrecy’ surrounding what’s happening.  When I put this to Cllr Leadbetter, we agreed that ‘commercial confidentiality’ is one thing, but that perhaps it had been taken rather too far!
The good news is that things are now moving forward.  After one year of the three year project, thanks to a significant government investment, more communities are now being connected to superfast broadband.  I know that Cllr Leadbetter will be a very effective advocate for us and push North Devon’s case to ensure we get the service we need.
On mobile phones, you may remember last week I wrote about the visit to North Devon of Justin Tomlinson MP, a ministerial aide at the Department for Culture, Media and Sport.  This week, his department announced that North Molton has now been connected to a strong and reliable mobile signal thanks to cooperation between the networks and the government.  I’ll be pushing for more of the same in other rural communities across North Devon.

Chulmleigh Community College
On Wednesday I was delighted to be invited to the official opening of phase two of the excellent new buildings at Chulmleigh Community College.  This transformation has created some of the best facilities of any school in our area.  The students, staff and wider community are rightly proud of what they’ve achieved.
There is a problem with funding for the next phase of the project.  At the opening, I spoke to one of the senior management team from the Educational Funding Agency.  I am now more optimistic that we can release the funds necessary to see this project completed, but I will keep working on this.  Again, we must ensure that North Devon always gets its fair share.