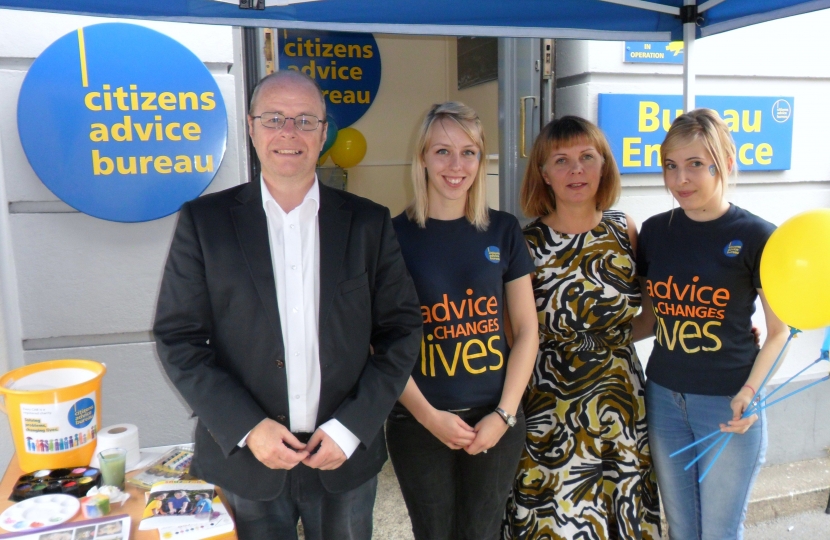 Citizens Advice Bureau
This year marks the 75th anniversary of the Citizens Advice Bureau.  The organisation is part of the fabric of our communities and there can’t be many of us who haven’t used its services over the years.  That’s why I was delighted last Saturday to attend the open day of the new C.A.B. headquarters in Barnstaple.  The photo shows me meeting some of the Bureau’s volunteers along with Manager Sarah Davis.
The Torridge, North, Mid and West Devon Citizens Advice Bureau, to give it its full title, is busier than ever.  Sarah told me that debt and benefits are the two subjects that most frequently crop up.  We spoke at length about these issues and how people can be helped to deal with them.
On debt, a lot of problems are caused because people simply haven’t been given the skills or knowledge to operate their own budgets.  I am a big supporter of better financial education in schools – an idea pioneered by Justin Tomlinson MP, who you may remember visited North Devon a few weeks ago.  The Bureau agrees, so I am pleased that this is having a positive impact.
Sarah and I talked at length about the challenges facing the Citizens Advice Bureau.  Funding, of course, is the main one.  Local councils have cut their grants and the Bureau now has to look at alternative sources of funds.  On the brighter side, the Bureau has many excellent volunteers who give their time for free and provide a vital service to many people.
I promised to do what I could to spread the word, so if you would like to volunteer or help with fundraising, please contact the Bureau in The Strand on 03444 111 444.  That’s also the local rate number if you want help or advice, or you can visit in person.
It was a privilege to see inside the new headquarters and meet the people who do such good work on our behalf.  Happy 75th birthday!

Tourism
On Wednesday I took part in the ‘emergency conference’ to discuss our region’s tourist industry.  It was organised by Trevor Stanbury who, as well as being on the board of North Devon Plus, is the boss of one of the region’s biggest attractions, The Milky Way Adventure Park.
The conference, at the Queen’s Theatre in Barnstaple, was called in light of the decision by our two District Councils to withdraw their funding from tourism marketing.  I’ve written before about the importance of tourism to the entire North Devon economy.  At the conference we learned that it’s worth about £550 million pounds a year and supports thousands of jobs.  If we don’t promote what we have to offer and get the visitors through the doors, it will have an impact on many people across the area.
The conference agreed that part of the answer will be to, in effect, resurrect what used to be known as the North Devon Marketing Bureau.  This will have the single aim of promoting our tourist industry, rather than having the wide range of disparate functions which North Devon Plus has to juggle.
I have carried out several surveys of the tourist industry, and another one has just been delivered in the last week or so.  I will continue to support moves to promote North Devon better and thought this conference was a big step in the right direction.
Incidentally, the North Devon Journal is running a campaign in conjunction with this event – you can read more about it there.  And please let me know what you think too.

English Votes for English Laws
This time last week we had just heard the result of the Scottish independence referendum.  Seven days on, and the debate about what happens next is still raging.  And quite rightly so, because we are talking about a fundamental principle of fairness.
Put simply, it’s wrong for Scotland to get more powers without England having more say over our own affairs too.  And why should Scottish MPs at Westminster have the right to decide on matters which affect only England?
It’s absolutely right that David Cameron wants to move ahead quickly on this.  The other parties have got themselves into a complete muddle trying to advance their own interests; either that, or they simply cannot deliver what they promise.
My position is clear – I want English votes for English laws, more powers to decide what’s best for ourselves, and crucially more decision-making to be devolved here in the Southwest.  Importantly that mustn’t mean more politicians, just more fairness.

Conference
I feel sure this will be one of the topics near the top of the agenda at the Conservative Party Conference which starts this weekend.  I’ll be in Birmingham to represent North Devon.
Conference isn’t just about what happens in the main hall or the speeches from the platform – although they’re important. It’s also a vital opportunity to have a lot of meetings in quick succession with the key decision-makers; you can quite literally bump into a cabinet minister in the coffee queue!  I’ll use every opportunity to push North Devon’s case.